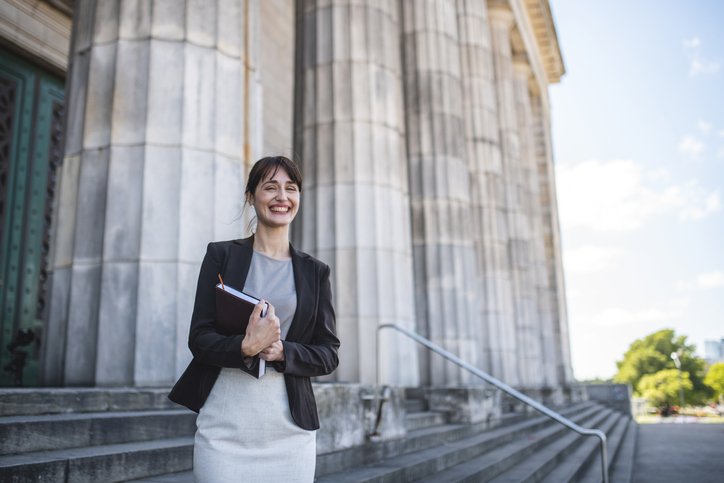 Becoming a lawyer is a difficult journey. The first step, for most students, is enrolling in a three-year bar sponsored law school. While school can boost your success as a lawyer, it’s not for everyone.

For most lawyers it’s money well spent, because the average median income in the US for lawyers is around $120,000. Unfortunately, not everyone passes the bar exam on their first try, which can lead to financial ramifications. Plus, if you decide against being a lawyer, that debt won’t pay itself.

Along with going to school and preparing for exams, law students also commit a lot of time to extracurricular activities. For example, many lawyers spend their time interning at law firms and doing mundane tasks that lawyers don’t want to do. In some cases, these internships might not prepare students for the exam.

While law school is the typical path for most lawyers, what if we told you there was a different way?

Yes, it’s possible to become a lawyer without taking all of these steps. Some states offer alternative programs for aspiring lawyers, which include apprenticeships following judges or practicing attorneys. These programs are known as “reading the law.”

Aspiring lawyers that follow this path have the benefit of saving money, but it doesn’t work for everyone. In the last year, only sixty bar exam takers were apprentices, and of those sixty, only seventeen passed. That’s only 28.3% compared to the national average of around 80% in 2020. But, while it’s a steep path, if you’re dedicated, anything is possible.

We’re going to take you through everything you need to know about becoming a lawyer without pursuing a law education. If you’re interested in sitting for the bar, or if you’re deciding between going to school or an apprentice program, read on.

History of the Reading the Law

When the United States was founded, there were no formal law schools for people to go to. The path to becoming a lawyer was different and revolved around apprenticeships. In colonial America, lawyers learned through following someone who practiced law.

Formal law schools were not introduced until the early 1800s. These schools offered an alternative path to becoming a lawyer. The programs that schools offered were more diverse than apprenticeships, but that wasn’t always a good thing. Most schools focused on biblical study, the economic theories of Adam Smith, philosophy, and other subjects alongside law. While students received a law degree, it didn’t always prepare students for the bar exam.

Throughout the 1800s, students had the opportunity to choose. It was common for students to pursue apprenticeships, and they weren’t at a disadvantage. If you could pass the bar, you were good enough to be a lawyer. The only downside to these programs was that they were limited, and there were no regulations that required students to study under lawyers.

Famous People who Read the Law

If you’re looking for inspiration, you don’t need to look far. There are a handful of famous people throughout US history that have passed the bar without a law degree. In fact, many of these individuals went on to become the president or do great things.

Abraham Lincoln is one of the most well-known presidents in US history. While many know of Lincoln’s feats as president, there is more to Lincoln’s story than the Civil War. Before he became president, Lincoln read the law on his own. Instead of attending a university or becoming an apprentice, Lincoln studied the law independently. He even passed the Illinois Bar Exam with no issues.

John Adams is a less well-known president than Lincoln, but he was the second president of the United States. Adams was well versed in law and studied law as an apprentice instead of going to a law school.

Thomas Jefferson is another famous president that studied law on his own. While he is known for being the third president, Jefferson was one of the founding fathers and a principal author of the Declaration of Independence. It’s impressive that he drafted such an essential document without a formal legal education.

Daniel Webster is less famous than the likes of Adams, Lincoln, and Jefferson, but his contributions to US law were no less impressive Webster was a senator that shaped a handful of crucial Supreme Court cases, and he studied law with his friend in his office rather than in a formal law school.

John Marshall is a man that many lawyers aspire to be like. He was the Chief Justice of the Supreme Court for years ,and ruled on several pivotal cases. While Marshall was able to reach the highest level of the law, he only attended six weeks of lectures at William and Mary. Instead of completing his formal law education, Marshall decided to apprentice instead.

Clarence Darrow is a man that saw the price of a formal law education and ran the other direction. While he avoided law school, he didn’t let that ruin his dreams. Darrow dropped out of school and studied in a law office instead. Darrow had a lot of success as a lawyer and was a part of famous cases like the Scopes Monkey Trial.

Law was practiced by a mix of apprentices and students that took the bar exam. This changed when the American Bar Association (ABA) was founded. The ABA was founded in 1878 and was comprised of 100 lawyers in 21 states. These lawyers disliked the idea of self-study and lobbied for a uniform code of ethics.

The ABA grew and convinced most states to get on board with their ideas. The organization convinced each state that only law students should be eligible to take the bar exam and become lawyers. Today, the American Bar Association has continued to grow and remains opposed to the idea of self-taught lawyers.

While the American Bar Association has established institutions that work well, it comes at a hefty cost. Students that attend ABA-approved universities have a better chance to pass the bar exam on their first try, but they’re also more likely to remain in debt for years, even decades.

How to Take the Bar Exam Without Going to Law School

There are only four states that allow you to take the bar exam and practice law without a formal law education. These states include Washington, Virginia, California, and Vermont.

In California, students can take the bar exam if they meet state requirements. According to the state’s legal bar code, under rule 4.29, students can participate in the Law Office Study Program.

While California allows students to follow this path, it’s not encouraged. The formal education system frowns upon this practice, so most students don’t hear about this opportunity. You’ll have to discover this path on your own and look for a practicing attorney that’s happy to teach you. Unfortunately, finding an attorney with an extra eighteen hours per week can be difficult.

If you want to practice law without a formal education, Washington is the best place to succeed. The Washington State Bar is supportive of apprentice programs and has a network of volunteers that help students prepare for the exam. In Washington, for apprentices, the passing rate for the bar exam is 67%. Compared to the national average of 28.3% for apprentices, that’s a number to be happy about.

While Washington offers a lot of assistance for students, their apprentice program is not easy. The program is called the Law Clerk Program, and students must meet the guidelines provided by APR rule 6. These guidelines include a bachelor’s degree, good moral character, and full-time employment for a lawyer that has ten years of experience. Students must work in this environment for at least four years, and progress is monitored.

The state of Virginia offers a lot of options for students that want to become lawyers without a law degree. They have a vast network of volunteers and online programs for students to participate in. While the passing percentage isn’t as high as Washington, Virginia is a great place to be a law apprentice.

Virginia’s program is known as the Law Reader Program and requires students to push themselves. Students must work under a lawyer that has ten years of experience, and students can’t be compensated during their studies. Students must work with their mentor for three years and spend twenty-five hours in their office, with three hours each week, including direct supervision.

The program is one of the more informal apprenticeships available. Students need to study for twenty-five hours per week under a licensed attorney for four years. The only caveat is that the attorney must have ten years of experience, and students can’t be compensated for their efforts.

While these four states require no law school, there are a handful of states that only require a few years of law education. These states are New York (which requires just one year of law school) and Maine (where you’ll need two).

Though much more restrictive than the opportunities in the above states, a West Virginia student who has attended three years at a non-ABA-accredited school can undertake an additional three years of apprenticeship at a law firm in order to become eligible for the bar exam.

The Benefits of Law Apprenticeships

There is a negative stigma that comes with a law apprenticeship. Many lawyers and educators believe that they’re a waste of time, but this is far from the truth. In many cases, a law apprenticeship can be more fruitful than pursuing a law degree. It just needs to be done correctly.

One of the best things that comes with a law apprenticeship is a hands-on experience. Instead of sitting in a classroom setting, students can actively work with their mentors. Depending on your mentor, that can mean working on real-life cases and observing critical law skills.

With hands-on experience comes job opportunities. If you’re apprenticing under an established lawyer, you’re setting yourself up for success. If they like you, they can hire you once you pass the bar or refer you to other firms in their network. While you’re an apprentice, you’re mostly doing one big internship.

One of the best reasons to pursue an apprenticeship is the amount of money you can save. Whereas law school and bar preparation can cost upwards of $150,000, apprentice programs can cost less than $5,000. Plus, if you’re in a state like Vermont that doesn’t require a full bachelor’s degree, you can save more money.

Going to law school yields a higher pass rates than apprenticeships, but that doesn’t mean it’s the best route for everyone. If you live in one of the states that allow admission to the bar based on apprenticeships, it’s a good idea to check them out. With enough hard work and dedication, paired with great bar preparation, anything is possible. Be inspired, not in debt.